Footnotes are lovely. Really. Do you like what you’re reading and want to discover more? Do you enjoy getting credit for your work? Consider footnotes as your vehicle to knowledge and your best bet for sending or receiving due respect.

The original thesis has endnotes in the back, on pages titled “Footnotes.” Curiouser and curiouser.

It was so hard using a typewriter to create them. The paper is onion skin. It’s a little crinkly, a bit slick, and has aged to a mellow tawny color. There are brushed-on strokes of white-out here and there. There are attempts to fix letters with a pen. The holes were punched by hand. On the back of the last page, on ring reinforcers, there are two tiny notes: SORRY and I TRIED. Apologizing for the twice-punched page, which apparently I couldn’t bear to retype.

What the heck were those ring things called? I think they peeled off a strip and you wet them to stick. Or did they come in a package and you poured them out? Most of them have fallen off. The typewriter clattered and made a distinct grinding noise when you rolled up the page and ultimately ripped it out of the machine. Something that I haven’t heard in decades but think I would recognize instantly if it appeared again in my life.

Can you get a feeling of how physical this was?

Sometimes I think the inspiration for the entire project to digitize “Untitled” was the way the black ink turned red in part of some letters. These footnotes are survivors. Here they are in all their glory, transported to the 21st century. 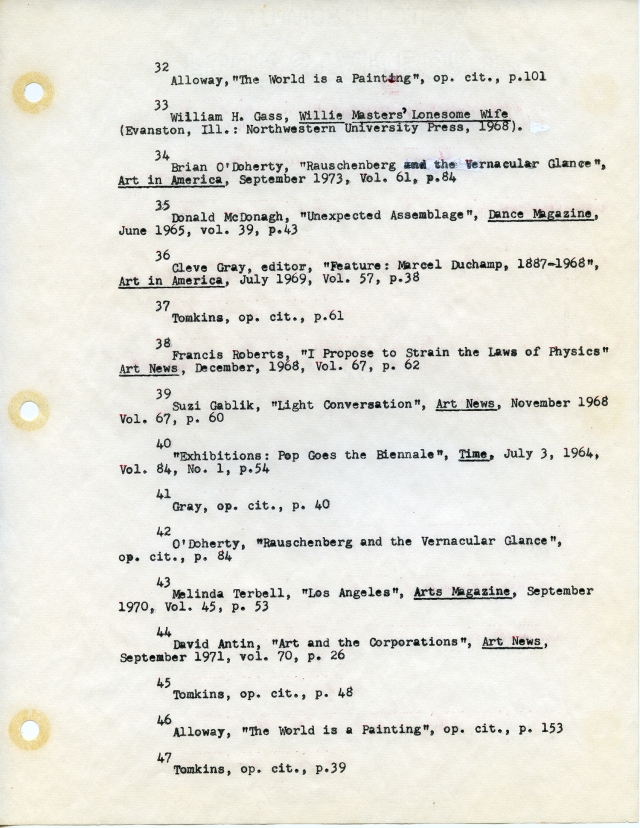 Original art by Catherine Rutgers, with musings on the media and the methods. Founded in 2010. “I believe in magic moments. Am not afraid to be sentimental, and adore a tweaked cliché. Two of my favorite pastimes are watching paint dry and observing green tendrils unfold.”
View all posts by CatRutgers4Art →
This entry was posted in Revelations and tagged book in progress, footnotes, paper, typewriter. Bookmark the permalink.